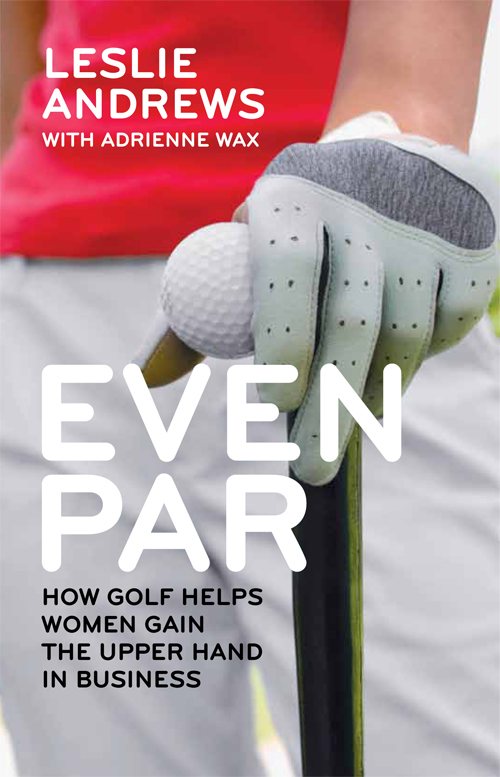 An Excerpt from Even Par. How Golf Helps Women Gain the Upper Hand in Business

The Difference Between Boys and Girls

Let’s get down to brass tacks here: what really is the difference between boys and girls? We’ve got pink and blue. Barbie and GI Joe. Dora and Diego. The differences start young and they stick for life. They exist in grade school, high school, college and b-school. They translate right into the business world, and darned if those differences don’t rear up on the golf course as well.

On the face of it, one might assume that the challenge of learning to play golf is the same for men as it is for women. Not so. Granted, all new golfers need to master a certain skill set, starting with grip, stance, posture, etc., right on through to learning a cut shot or a knockdown shot. These skills are not gender-specific and can be mastered equally well by men and women. So what is so different for women in their quest to take up the game of golf? Simply put, the psychological approach of women is far different from that of men. The mindset of the average woman learning to play golf is, “I can’t do this because I’m just not a good enough player.”

Boys think they are entitled to play golf if they can find their way to the golf course. Girls think they have to excel at the game before they go out on the course. I’m here to tell you: the boys are right in this instance, without question.

I have had more women than I care to acknowledge tell me that they think they need to be as good as the people they watch on television (that would be PGA Tour and LPGA Tour professionals) before they venture onto the golf course. This is to say, women are saying, “I can’t play golf because I am not as good as the best players in the world.”

Name one other endeavor in your life where you expect to do something as well as the BEST IN THE WORLD before you make it a hobby? Would you expect to play the piano like Elton John? To sing like Aretha Franklin? Time to re-calibrate those expectations.

There is a bare minimum knowledge and skill level one should have before going out to play golf.

That’s it. Guys get this. They understand that the real point of golf is to go out and have fun, spend the day with some buddies, hit a couple of good shots, lots of lousy shots, have a few drinks, and go home. Come back next weekend and repeat. Or just show up at the company outing and smack a few balls around for 18 holes. As a result, men are far more likely to reap the business benefits of golf, simply because they are out there, not because they are doing a good imitation of Jack Nicklaus.

I recommend to female students who suffer from this symptom that they spend a half hour near the first tee of a golf course to observe several foursomes as they tee off. In the course of 30 minutes, you are likely to see a wide variety of shots – chances are most of them will go way right, way left, way anywhere-but-straight and there will probably be a fair number of ground balls. Mixed in will be the occasional good shot, but the majority of golfers are hackers, which is to say, people out there hacking their way around the golf course. And that’s okay. More than okay – that’s golf! The exercise of watching other golfers tee off provides women with a much needed context within which they can understand and appreciate their ability vis-a-vis the ability of others. The average golfer is nowhere near as good as the golfers you see on television, not even close.”

Moral of the story: golf imitates life in that women feel they need to be “better than,” just to keep up. As it pertains to golf, women need a context in which to develop reasonable expectations – the basic expectation being that you play, not that you play particularly well.